This event is a virtual event, hosted on Zoom. 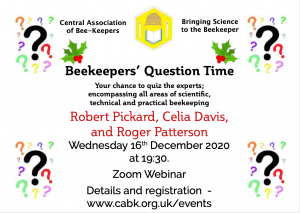 This event is free to all, CABK Members and friends

Registration for this event is now available, by clicking the link below

Celia Davis has 2 great passions: gardening and insects, more particularly bees. She started bee-keeping 40 years ago, holds an NDB but has now reduced her bee-keeping to 2 colonies at the bottom of the (new) garden.

In an earlier life she was a teacher and lecturer, a visiting lecturer at 2 universities and now talks to various groups, including many bee-keeping organisations.

She also writes articles and has written two highly regarded books on bees. She has held various posts in Warwickshire Beekeepers Association over many years.

Roger Patterson started beekeeping in his native West Sussex in 1963. He is Apiary Manager and demonstrator for his local BKA and lectures and demonstrates widely, where his practical approach is appreciated.

He is an author, contributor to the beekeeping press and owns the well-known Dave Cushman’s website.

Roger uses colony management techniques that have stood the test of time, but may not be found in modern books. He is keen that beekeepers understand “the basics” and they keep healthy productive bees that suit their environment.

Robert Pickard is Emeritus Professor of Neurobiology at the University of Cardiff and President of the Central Association of Beekeepers. He is an Independent Member of the Parliamentary and Scientific Committee, Chair of the International Bee Research Associationand a former Editor of the Journal of Apicultural Research.

His research team developed new microelectronic technologies for the recording of biochemical activity in brains and tumours. In 1985, the first computerised atlas of the honeybee brain was illustrated at The Royal Society, in London, and Apimondia, in Nagoya.

Robert has studied bees since 1956 and his postgraduate students are spread through 50 different countries worldwide.