CABK members and Non-members are welcome to attend.  There is no fee for this event which also will be live-streamed to the CABK YouTube Channel – watch live or later, on demand.

Registration for this Zoom event is now open.

Prof. Breno Freitas will talk about the fascinating stingless bees and solitary bees that make an important contribution to Brazilian ecosystems

“In this presentation, I will show that among the 20,000 bee species in the world about 85% of them have a solitary life style. Despite the better known and studied bee species that inhabit temperate climates of the world, the greater diversity of solitary bees are in the tropics, and they are amazing!!! There are species that use floral oils to build their nests and to replace nectar as the energy source to their offspring, and species where males have to collect floral essences in order to mate, while in other species the females excavate through hard wood to build their nests. I will also talk about a group of tropical social bees that give up their stings in exchange for a variety of defensive strategies, and have found different ways to organise their colonies, from the nest architecture to brood and queen production.

But the point I will address is that these tropical bee species are not just weird curiosities of the bee world. They are also essential pollinators and are involved in intricate food chains in the tropical forests, and can be sustainably used for the production of food (honey and pollen) and other hive products (geopropolis, resins) and to assist pollination of crops, provided we develop techniques to rear and manage them. I will show what we have achieved so far. 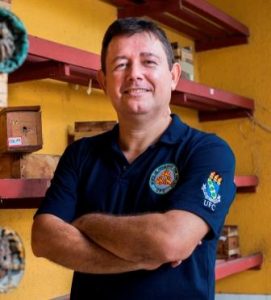 Breno M. Freitas has worked with bees since 1984 when he became a beekeeper working with Africanized honey bees. Later, he achieved his first degree in Agronomy (1988), M.Sc. in Animal Science (1991) and PhD working with bees and crop pollination (1995) taken at the University of Wales College of Cardiff, UK. Presently, he is a Full Professor in the Department of Animal Science at the Federal University of Ceara, Fortaleza, Brazil, teaching and supervising undergraduate and graduate students of the Agronomy, Animal Science and Biology courses.

He researches ways in which bees can contribute to human food production and natural ecosystem sustainability, having pollination in the Neotropics as the central point. To this end, he and his interdisciplinary team of researchers, students, and industry collaborators investigate pollination requirements of agricultural crops, agricultural pollination in Brazil, pollinator efficiency and breeding and management of Africanized bees and species of stingless bees and solitary bees in agriculture. Threats to bee health and their pollination services due to climate change, deforestation and pesticide misuse are studied through precision beekeeping, gene expression, data mining, Artificial Intelligence, remote sensing, Internet of Things and monitoring and tracking of bees and colonies. His national and international partnerships on these topics have given rise to several projects and publications.

He has also worked as a researcher for the Brazilian National Council for Scientific and Technological Development (1996 – present), member of the Brazilian Pollinators Initiative (1998 – present), member of the Scientific Council of the International Commission for Plant-Pollinator Relationship (2010 – present), he has acted as a consultant and contributor to FAO in several projects and co-author of its publications, and he served as member of the Scientific Council of the Brazilian Federation of Beekeepers (2000-2022) and Coordinating Leader Author of the IPBES – Intergovernmental Platform for Biodiversity and Ecosystem Services of the United Nations to the theme of pollinators, pollination and food production (2014-2016).